Skip to content
The United States’ Federal Bureau of Investigation, Monday, said it had arrested 74 ’email scammers’, 29 of them Nigerians in a global operation.
The bureau also said the criminal scheme, which was used by the suspects, originated from Nigeria.
The FBI said 42 suspects were nabbed in the U.S., 29 in Nigeria, and three others in Canada, Mauritius, and Poland. 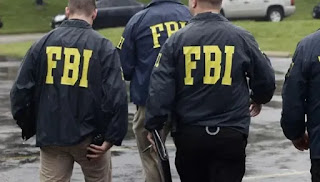 Some of those arrested were working as part of a larger network of criminal organisations, while others acted alone, the bureau said.
In a statement published on the agency’s website, it said, the operation was a coordinated effort by the federal authorities including the Department of Justice and the FBI aimed at intercepting illegal wire transfers from businesses and individuals across the globe.
“Operation Wire Wire,” a coordinated effort by Interpol, national police forces, and U.S. agencies including the FBI, DoJ, Homeland Security, Treasury Department, Secret Service, and the Postal Inspection Service, was conducted over a six-month period.
”In addition to the arrests, it resulted in the seizure of nearly $2.4 million, and the recovery of approximately $14 million in fraudulent wire transfers,” the bureau said.
The coordinated law enforcement effort was ”to disrupt international business e-mail compromise (BEC) schemes that are designed to intercept and hijack wire transfers from businesses and individuals”, the agency added.
Part of the statement read:
”BEC, also known as cyber-enabled financial fraud, is a sophisticated scam that often targets employees with access to company finances and trick them using a variety of methods like social engineering and computer intrusions into making wire transfers to bank accounts thought to belong to trusted partners but instead belong to accounts controlled by the criminals themselves.
”And these same criminal organisations that perpetrate BEC schemes also exploit individual victims often real estate purchasers, the elderly, and others by convincing them to make wire transfers to bank accounts controlled by the criminals. Foreign citizens perpetrate many of these schemes, which originated in Nigeria but have spread throughout the world.
”During Operation WireWire, U.S. law enforcement agents executed more than 51 domestic actions, including search warrants, asset seizure warrants, and money mule warning letters. And local and state law enforcement partners on FBI task forces across the country, with the assistance of multiple district attorney’s offices, charged 15 alleged money mules for their roles in defrauding victims.”

No work No pay, it does not affect ASUU

ABUJA — THE Federal Government has pulled back the ongoing risk to actuate the ‘no work no compensation approach’ against striking college instructors. This was unveiled by the National President of the Academic Staff Union of Universities, ASUU, Prof. Biodun Ogunyemi, in a select talk with Vanguard yesterday.Ogunyemi likewise said that the transaction meeting among […]

Andy Cohen maintains Getting Kicked Off a datting App

it’s difficult to discover love on line and it’s in particular difficult in case you’re Andy Cohen .on the Ellen DeGeneres show on Thursday, the forty nine-12 months-vintage host of Bravo’s Watch What occurs live said he was unmarried and that he uses Tinder and is likewise the use of another relationship app, although he […]

On Monday, John appeared on Today, where he spoke candidly about what life has been like since they called off their wedding. “It’s up and it’s down. It’s been incredibly reflective, which is amazing, but it’s very difficult. I had my heart broken out of nowhere—for me, it was out of nowhere. Anyone who has […]